The new ENSIS-3015AJ RI laser cutting system and the new FLW-3000ENSIS M5 welding cell are the latest further developments based on the proven ENSIS laser beam source. The two systems are characterized by above-average efficiency which, coupled with their perfect manufacturing quality and outstanding versatility, gives all users a crucial competitive advantage.

AMADA’s laser technology has long been one of the company’s core strengths. AMADA presented its first laser cutting system as early as 1980 and ever since then the company has continuously enhanced its laser machine concepts, most recently on the basis of the proven fiber laser, and extended its range of solutions to cater for practically every format, material and batch size. The most recent models are the ENSIS-3015AJ RI laser cutting system and the FLW-3000ENSIS M5 welding cell.

The ENSIS-3015AJ RI stands for smooth, trouble-free production at high speed and with optimum cutting quality.

To a large extent a logical further development of the AMADA
FO-3015MII RI CO2 laser system, the new ENSIS-3015AJ RI with its innovative rotary index (RI) now possesses its own profile and pipe machining unit. This means that it is now possible to cut not only sheet metal but also pipes and other profiles simply and precisely using a fiber laser. The fiber laser, which is automatically adjusted to the current sheet thickness thanks to AMADA’s variable beam adaptation solution, has an output power of 3 kW. It can therefore cut ordinary steel and stainless steel, as well as nonferrous metals such as aluminum, copper, brass and titanium without difficulty. What is more, the rotary index unit, which has been redesigned and optimized for ENSIS, contains a new generation of tubular axes that decisively further improve the speed and precision of the laser cutting system. At the same time, the optimized pipe guide ensures virtually scratch-free machining.

Another new feature of the AMADA ENSIS-3015AJ RI is the material measurement unit for the fast, precise measurement of pipe reference surfaces. A carbon tray is used to receive the cut pipes and profiles. The practical sliding doors on the ENSIS-3015AJ RI permit optimum machine accessibility, while simultaneously providing reliable protection against reflection and slag projections.

The new AMADA ENSIS-3015AJ RI is operated at the touchscreen of the AMNC 3i control unit. It is simple and intuitive to operate, helps minimize setup times and reliably evaluates the machine data. Because there is no longer any need to change lenses and because nozzle changes are performed fully automatically, the AMADA ENSIS-3015AJ RI permits practically interruption-free production that combines high speeds with optimized cutting quality. Numerous automation options are also available, for example in the form of the ASF-EU automatic material tower or the MP-F loading and unloading unit, that increase the cost-effectiveness of the overall system still further.

As the most recent development in AMADA’s FLW series, the new FLW ENSIS laser welding cell is setting completely new standards in laser welding. It is based on the proven 3 kW fiber laser with variable beam adaptation and the innovative weaving technology whose integrated rotating optics allow the laser beam to move from side to side. This AMADA system has now been optimized once more for use in the FLW ENSIS. With the so-called “Ring Mode Beam”, the welding beam fans out in a ring shape that allows it to optimally bridge even large gap sizes. In combination with the weaving technology and the push-pull filler wire guide, this makes it possible to work with far larger gap sizes than are possible using conventional laser welding technology. 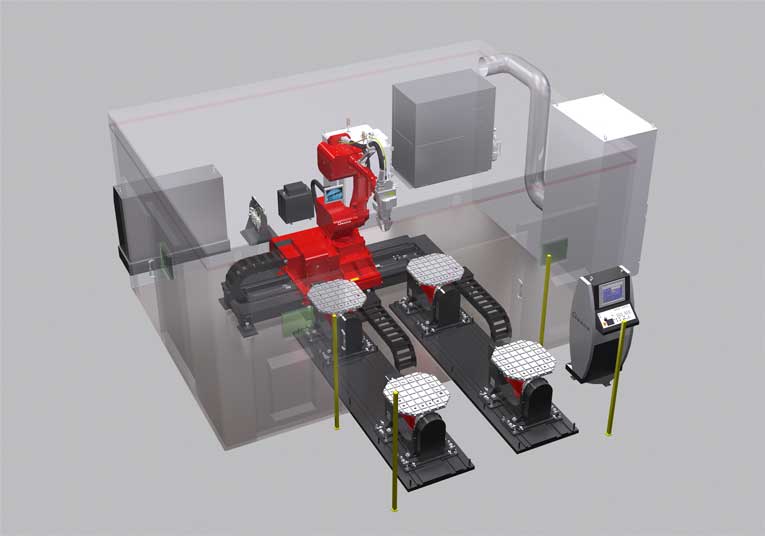 The new changeover table system with two tables boosts the performance of the FLW-3000ENSIS M5 even further.

In the FLW ENSIS, the laser beam itself can always be individually adapted to the specific material of the component. In practical use, the new system excels not just through the outstanding quality it offers but also through its particularly fast cutting speeds. Thus the general welding speed is significantly greater than in conventional laser welding systems. The key: The welding process can be regulated with such precision that no deposits, deformations or discolorations can be seen on the backs of thin sheets. This outstanding quality feature is due to the precisely defined energy penetration of the fiber laser into the workpiece.

This is a great benefit to users, including, for example, during overlap welding. Here, there are no visible traces on the back of the metal sheet, in contrast to conventional spot welding operations. The welds that are applied during this process are at least as durable and resilient as joins produced using spot welding – and the entire welding operation is completed in just a fraction of the time that would otherwise be required. The FLW ENSIS also works significantly faster than conventional solutions when manufacturing housings, during which it is necessary to weld the outer edges and apply metal plates to reinforce the back of the component. And the FLW ENSIS is very often able to weld different materials together extremely effectively in just half the time taken by conventional approaches.

The FLW ENSIS also excels in other welding applications such as butt-welding or flux-cored welding. In this latter process, it is possible to switch between welding with and without filler wire during ongoing operation. What is more, the handling of the FLW ENSIS has also been significantly improved. Thus the M5 version of the system now possesses a changeover table system with two tables. While welding is being performed in the booth at the first station, the second table can be made ready, thus significantly cutting cycle times and greatly reducing idle times