To familiarize the up-and-coming generation with the sheet metal working specialty, AMADA is currently supporting the Robotic workgroup at Haan High School and in this way encouraging the technicians and engineers of the future.

“In our workgroup, we design, build and program small robots that play against other teams in national robot football competitions. We develop the board layouts for the microprocessors, plan the corresponding electronic circuit diagrams, assemble the individual parts, and program them. In a test phase before the competitions, we check whether everything is working as it should,” explains teacher Roland Stiebel, head of the Robotic workgroup at Haan High School. Some 15 years ago, he formed a student workgroup to build small robots and these have been constantly evolving ever since. Only recently, this group of 11 to 19-year-olds won the Western German Robocup Soccer championship, a football tournament for robots, for the fourth time and thus qualified for the national championship. These youthful engineers are supported by AMADA GmbH and other sponsors. Stiebel: “During his period of work experience with AMADA a few years ago, one student punched aluminum parts for our workgroup for the first time. Both parties were so impressed with this work that we entered into a longer-term cooperation.” In addition to manufacturing special parts for the robots, this collaboration now includes tours of the factory. 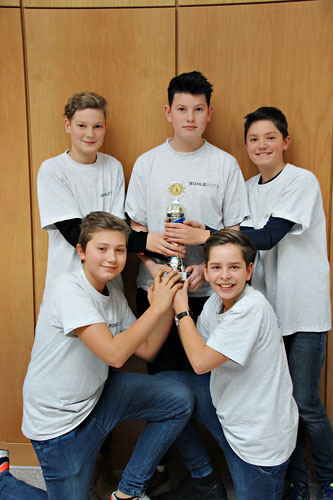 2017 Western German champions in the RoboCup Soccer competition: Students in the Robotics workgroup.

Investing in the future

On two afternoons a week, the group, which now numbers 52 students, meets to build their robots together. And during the run-up to competitions, they may even meet four times a week. This would not be possible without passion and commitment, this is clear to Michael Honig, General Manager Consultant Engineering and AMADA School: “Students who are interested in such a high level of technology so early in their lives will be the highly qualified engineers of tomorrow. The Robotics workgroup at Haan High School is bringing on the new generation of skilled workers that companies will need in the future.” The Robotics workgroup is also highly thought of in the school itself. The many competitions it has taken part in guarantee that it is respected by fellow students and teachers alike.
Roland Stiebel: “In the near future, we want to accomplish even more. We want to take our robots into areas where we need very special metal parts. Here, again, we are hoping that we can count on AMADA’s support.” Because despite all their successes, the team is still waiting to compete in a world championship. “I am absolutely convinced that we will take part in a world championship within the next five years.”