Home > In detail > Dr.-Ing. Andreas Wetzig: “The only solution for 3D parts”

Solid-state lasers are now an integral part of the industrial welding and cutting landscape. Especially since they have now practically reached full product maturity, as Doctor Andreas Wetzig of the Fraunhofer IWS (Institute for Material and Beam Technology) explains in this interview. 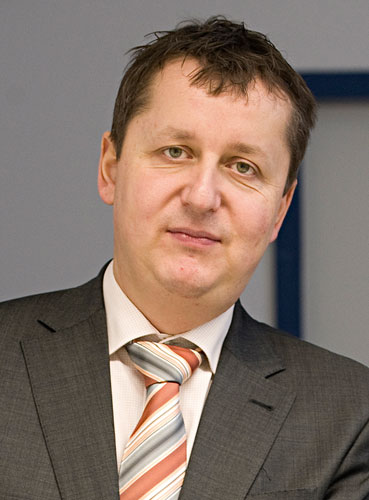 MARKER: Solid-state lasers suitable for use in series production don’t really go back that far …
Dr.-Ing. Andreas Wetzig: Correct. Approximately 15 years ago, we witnessed a surge in solid-state laser development and then ten years ago, the first fiber lasers for the machining of materials arrived on the market. The rod lasers that had been used extensively before that had physical and technical limitations and problems arose due, in particular, to the inadequate cooling of the rod. Research was therefore focused on the question of improving the surface area-to-volume ratio. One possibility was to stretch the rod as if it were a piece of chewing gum and this gave rise to the fiber laser. This made it possible to concentrate the cooling on the surface of the cladding. Whereas the earlier rod lasers never really made the breakthrough in the industrial high-performance segment, the new solid-state lasers succeeded because of advantages such as higher laser output, improved beam quality and better focusing capabilities, combined with the shorter wavelength of the emitted beam compared to CO2 lasers.

MARKER: What are the user benefits of fiber lasers?
Dr.-Ing. Andreas Wetzig: The costs and price per unit for laser-machined parts are going down. In particular in the 2D sector where thin sheets can be cut significantly more quickly using the same laser output or the same results as in the past can be achieved with reduced laser output. Fiber lasers are of interest for 3D operations when high-strength steels are used, as is increasingly the case nowadays. For example in the field of vehicle body construction. In the 3D segment, solid-state lasers have now practically become the only possible solution. Basically, fiber lasers are suitable for use not only in combination with linear 5-axis machines but also for robot applications because the task of guiding the beam to the machining heads is less complex. And fiber lasers are now even being used to cut thick sheets because improvements have been made to overcome the problem of rough edges.

MARKER: What is the future outlook for solid-state lasers, and fiber lasers in particular?
Dr.-Ing. Andreas Wetzig: Very bright, if the trend toward shorter runs of parts for cutting continues, in particular in the automotive, medical engineering and electronics indus­tries. And there’s no doubt that it will. What is more, parts are becoming more complex, they have more intricate structures with lots of ribs and angles, short linear sections, changes of direction. When it comes to tasks like that, laser cutting has its nose in front. 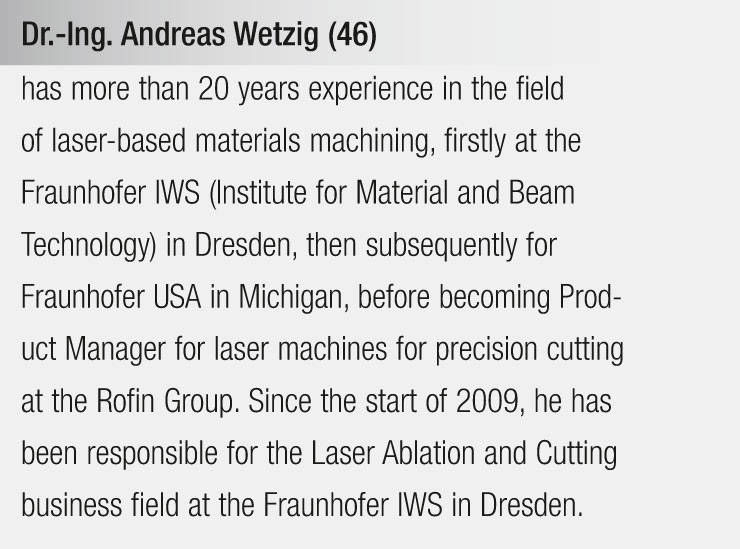 MARKER: Solid-state lasers are already highly developed – what does the future hold?
Dr.-Ing. Andreas Wetzig: At the purely technical level, I would say that cw solid-state lasers have more or less reached the limit of their potential. Improvements will relate primarily to developments that reduce the manufacturing costs of the lasers themselves. New developments will probably mostly take place in peripheral areas. For example by taking the type of in situ process control that is common in laser welding, where it permits automatic machine self-adjustment, and developing it for the laser cutting sector. Another question is how to get the delivered laser power really moving. That is to say, how can we reduce the mass that has to be transported in order to avoid losing too much speed, in particular when machining intricate structures. In other words: How can we implement a correspondingly high-speed system to deliver the laser power? Maybe by using an additional axis system at the optical assembly. And if you look further ahead then there is the possibility of completely new beam guidance concepts, for example by using galvanometer mirrors.