Welded assemblies, components for wind power plants, letter boxes or waste bins for outdoor use – that is just a small selection from the wide-ranging portfolio of products and services offered by the company Blechverarbeitung Dahlenwarsleben GmbH, or BVD for short, which has its head office in the German town of Gersdorf in the state of Saxony-Anhalt. The company was the first in Europe to commission an AMADA fiber laser system.

Gersdorf, like Dahlenwarsleben from which AMADA’s customer BVD gets its name, are both districts of the municipality of Niedere Börde which is situated close to the state capital Magdeburg. Ever since the company was founded in 1990, BVD’s owners have relied on machines and systems from AMADA for their production activities. The latest addition to the company, which is managed by second-generation owner Annette Meffert, is an FOL-3015 AJ fiber laser system – the first of its type to be installed at an AMADA customer in Europe. This fiber laser cutting system, which has been in operation since early 2012, represents a logical extension to the company’s machine pool. “Fiber laser technology allows users such as BVD to achieve significant savings in resources,” explains Michael Gülland who, as AMADA’s Regional Sales Manager (Germany East), is responsible for supporting BVD GmbH. “This is due, on the one hand, to the lower power consumption compared to conventional CO2 lasers and, on the other, to the reduced maintenance requirements.” What is more, the technology can be used to machine materials that cannot be processed using CO2 lasers. These include copper, brass and titanium, even at high sheet thicknesses.
The machining speeds achieved by the fiber laser helped win over the head of BVD, Annette Meffert. Because it is an established tradition in the company for the machines to have names, the FOL-3015 AJ is known internally as “Flea”. Annette Meffert explains: “Naturally this has nothing to do with the size of the machine. Actually, we call it that because the system is so swift.”

One of the BVD’s biggest heavyweights is “Popeye”, an AMADA HFP-2204 press brake, which works alongside its assistant “Olive Oyl”, an ABS R-165 handling robot. Together, they form a bending cell that is able to cope with large-sized, heavy components weighing up to approximately 100 kg. “In the past, it took up to three employees to bend parts like that. We use this powerful, automated bending cell not to save on human labor requirements but instead to create better working conditions for our employees,” stresses Annette Meffert. In the same way as the fiber laser, the introduction of bending robot technology in 2011 represented a new forward-looking departure during which BVD GmbH was able to count on AMADA’s technological support. 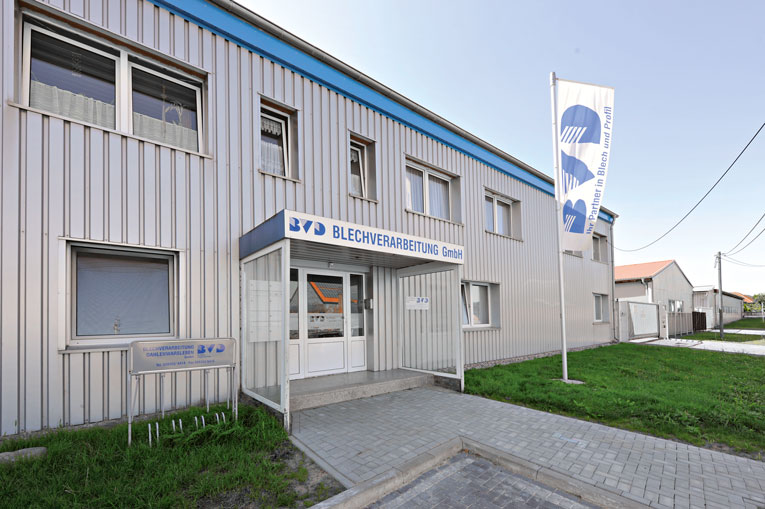 The company Blechverarbeitung Dahlenwarsleben GmbH was founded by Diether Dreilich, father of current Managing Director Annette Meffert. The founder, who died in 2007, showed great courage and foresight: He created this privately run business back in 1990, the year of German reunification, out of what had previously been a privatized company during the GDR era. The company already possessed decades of experience of sheet metal working. Instead, the great challenge consisted of constructing a modern production facility. Right from the outset, Diether Dreilich chose to rely on AMADA’s machines. Now, there are 16 of them in operation at the BVD factory in Gersdorf. Annette Meffert manages a team of more than 30 employees and points, with justifiable pride, to their level of training which is extremely high, in particular for the eastern part of Germany.